Ch 58 How To Train Your Dragon

So far I'm doing well. I'm still a bit surprised to be a district training leader but I'm happy and I'm loving my calling so far! it's a bit busier than I anticipated but it's nothing I personally can't handle. Right now I'm just hoping I'm training him correctly and showing him the right skills to do what he needs to do.

As a companionship, Elder Lewis is a very interesting missionary. He's funny a bit awkward but has a genuine desire to learn. There are times when I believe he's being a bit too mean to himself but I'm asking him to be more patient with himself. Emotionally he is not sad or depressed and is also very talkative like me. Which I like because I'll keep him talking to get his mind away from homesickness. He's very proactive and reminds me anything I might forget. Right now though he feels a little bit inadequate when teaching lessons and I'm trying to encourage him more. Last week for companionship and language study we focused more on learning tagalog. But this week we will focus more on Lesson plans and lesson 1-5 so he can teach in taglish.

Our wards, are still incredible. we had a baptism last week and could get 6 more this saturday, and Elder Lewis is having a fun Filipino rollercoaster ride. The wards are loving us more and we are doing everything we can to support them and visit members that they miss. Not only is it reactivating but it's helping us build overwhelming trust between missionaries and wards.

Have you watched the How To Train Your Dragon 3 Trailer yet? I haven't. But it's okay because my last week was even better. Or at least I hope it was. Anyway for my week I wanted to make Elder Lewis have a fun time. Like a really fun time. So we had the most adventurous work we ever had.

Day 1 of Elder Lewis' missionary extravaganza. I was dead tired. I couldn't sleep. I was so excited I ended up cooking breakfast at 4am only to pass out while eating breakfast. then I woke up. It was 6:00 and at that moment I knew I was screwed. All I was thinking was
"Oh no! I woke up late! President will make me a JC till I die"

And it was at that moment that I got ready, showered, sprinted, found a jeep, and called texted the AP's I was on my way. This took 5 minutes. The next 20 minutes was followed by traffic and me contemplating how I will be thrust down to hell.

Anyway I got there 40 minutes late and Surprisingly it was not too bad. After a lot of workshops and testimonies, I picked up my Anak and we got to work. We visited the leadership and ward members so he gets to know the area more and we practiced Tagalog till it hurts to talk. He loved it!

Day 2 of Elder Lewis' missionary Extravaganza I decided we need to have more fun in the work. I looked up and I saw some dark clouds heading our way. and you know what that means.

"Elder Lewis, leave your jacket and umbrella at the house, your bag is too heavy!" -E. Villanueva
"Those look like rain clouds" -E. Lewis
"Elder we're going swimming" -E. Villanueva

We proselyted for a few hours, showed him our recent converts and our baptismal candidate then waded through 2-3 foot or flood waters to get home. It was great!

Day 3.... We went to Norzagaray. and sat in a jeep for 6 hours to get to the baptismal interview. that was fun. But the best part was when Elder Lewis paid for the fare. now there are these 2 words in Tagalog. Bayad and bayag. Anyway his pronunciation wasn't golden yet and instead of saying
"My fare sir, for two" (Bayad ko po, dalawa)
He accidentally said
"My testicles sir, both of them" (Bayag ko po, dalawa)
And I just couldn't hold it in. I bursted out laughing and so did a few of the passengers. it was a fun time

Day 4 and 5 was a fairly simple day. had a baptism and church and that's about it. Nothing too interesting happened but it was good. 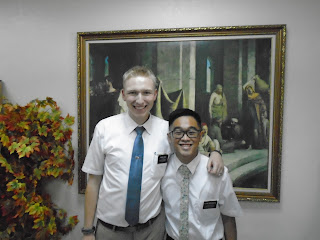 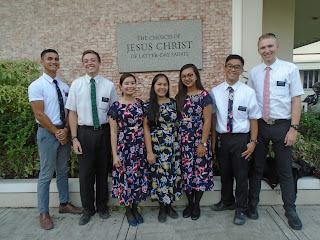 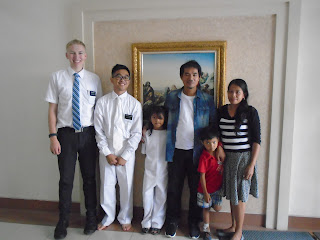