So I transferred to Bago Bantay ward. For anyone who knows the NCR Philippine area, that is right above EDSA and North Ave. next to Project 6 and SM North. Basically, it's a really fun area. The members here are so kind! they love missionaries they have a lot of referrals and even though they are very very well off, they're not afraid to get down and dirty and work with a missionary for 8 hours at a time.

My highlights for the week are whelp shopping... having the largest mall in the Philippines in your area is very fun. Also, I rapped Lesson 1 yesterday. Very fun. I'll send pictures next week sorry I don't have a lot of time!!
-Elder Villanueva

Have you ever seen the Goofy Movie? You know that old Disney Movie about Goofy and his son Max and they go camping? anyway in that movie there's this song called "I 2 I." About how they're seeing each other eye to eye. Anyway, that is our favorite song for this week. And it all started Monday night.

Monday I came home and it felt my eyes were blurry and I didn't know what was going on. But it's okay because I know I could probably get over it. Kept working, said "hi!" to everyone and did what we know we have to do.

Next morning. I woke up with a Sharingan  (Naruto reference to a red-eye power-thing that can show you insight or can hypnotize). My eyes were extremely red. But we had a full schedule. Of course, I needed to get that fixed though, so I went to the Doctors and then went on proselyting for the rest of the day.

Wednesday morning. Everyone woke up with red-eye...  And then Elder Fowles got a Fever. and then I got a cold. And then everyone got it. Now we really have companionship unity. anyway here's a lot of photos.
-Elder Villanueva

A cool 20 ft alien statue near our house

"The best things in life are meant to be shared! Like the Gospel!!!"

Let me tell you something about my little brother. His name is Hyrum and I admire him so much. He's so cool, if you don't already know him, you should put some time in getting to know him because he is an absolute bean. He is strong, he is brave, he is humble, he is smart, he is kind. But one thing I really appreciate from him is this one word in Tagalog. That word is, "tiyaga."

Now for me, the word that most people here have for me is "diskarte." For example, "may diskarte si Elder Villanueva, kaya nga marami syang binyag." (Elder Villanueva has diskarte, that's how he has a lot of baptisms.) People say that about me because I always find a way or figure out the right words or actions to get what I want or what I believe is best. In simpler terms, diskarte = Strategy or Tact.

But Hyrum, on the other hand, does have diskarte but he uses something else more prevalent and if you meet him you'll notice it too. He is ma-tiyaga. Whenever he struggles or admits to himself he doesn't know how to do something. He studies it in his mind, he asks for help, he prays for strength, he leads even if he messes up and learns from them, he goes through the hard grit of it all with a hopefulness that he will learn from it. Even if he doesn't want to, he does his best, with the self-control that he has, to do what he knows is true. I love him so much for it and it's something I wish I could be better at. In the year and a half, I've been gone I email him and I see him change and grow and be better and I have the utmost respect for him because of the things he's gone through to be where he is now. "Tiyaga" = Perseverance.
This past week I've pondered about tiyaga and self-control and I realize it's something I've struggled a lot within my life. Whenever a boulder is in my way, I make a shortcut. When it gets too heavy, I chose a different rock. And I lose the opportunity to grow from the times I was meant to fall. And it has been a weakness for me. I would let my personal opinions and thoughts dictate my action rather than maintaining my honor in doing what I promised to do. I would give too much notice to taunts and insults and let them bring me down. But this week was good. I did my best to push myself even if I didn't want to. Worked harder at loving others regardless of how tired I was and it's so great! It's hard and heartbreaking to put in so much effort to see some step-up and others ignore what could've been a wonderful experience but I know that with every extra smile or "hi" we give, especially the ones we don't feel like giving, we can see their lives change for the better. Does it take a little bit of tiyaga? Oh definitely! and it's okay cuz I know my brother will lend me a hand. 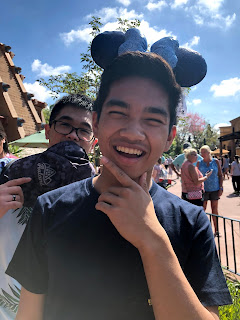 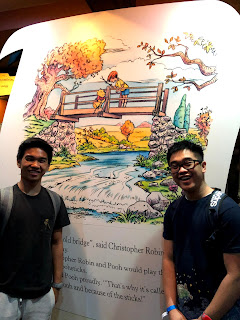 Lemme tell you about something that drives me. To me P-days are sacred. They are a time for me to prepare for the rest of the week and to be happier. it's one of those small and simple things that push me. I even have a nice prayer that's specific to a P-day. And then I found her. I got myself a vice and she is delicious. At SM Sangandaan there's this wonderful place. Full of people who happen to be deaf. They run a business and I do a little bit of ASL with them as I wait and then they give me something delicious. A cookie. A very good looking cookie. Like this isn't some ordinary cookie. This is a premium cookie by American standards. And it be a big cookie. Like they pride themselves in using a full Cadbury chocolate bar per cookie. This is a wonderful cookie. Just thinking about it, leaves me longing and lusting for this cookie. But it's so good, I know that once I partake of this cookie, it would leave me addicted like a heroin addict. I knew eating something like this might jeopardize my progress from daily workouts. But I had to. I've been eating 1 cookie every week for the past 3 weeks. Everyone in that store knows me... they even know my Sign name... I feel ashamed. I'll eat another cookie.

Also, we went on a trike because the flooding was too high so we had to ride a trike to get out of it. here's a picture!
-Elder Villanueva

Also, a video of us making kids laugh. It's was so funny... We've been funnier lately and hahaha it's been a fun time. Maybe next week I'll put in a picture of the cookies too
at 7:15:00 PM No comments: